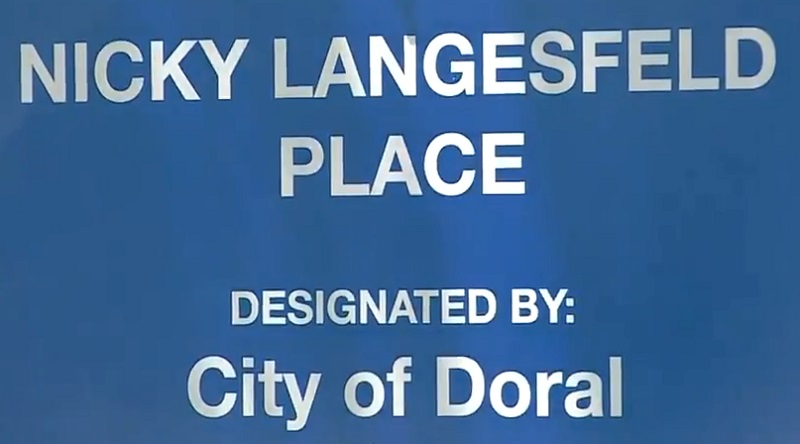 Doral, Florida – Almost one year to the day since the tower fell, on Wednesday, a special honor was given to one of the victims of the Surfside condo collapse.

According to officials, a nine-block stretch of Northwest 114th Avenue in Doral was officially renamed in honor of Nicole “Nicky” Langesfeld, who was among the 98 people who died in the collapse last year.

While Nicole Langesfeld lived in Surfside, she originally grew up in Doral not far from the street that now bears her name. “Every day she would drive down this street, run by this street, bring her dogs to this park over here,” her brother said. “It’s a very meaningful event for us to be able to do this under her name.”

“Anytime you honor someone, it’s better to do it when they’re alive than when they passed away because it’s very bittersweet. And today is a bittersweet moment, but it’s an important moment because her legacy will live on the right by the area where she grew up,” Doral Mayor Juan Carlos Bermudez said.

Nicole Langesfeld, who attended law school at the University of Miami, married her husband, Luis Sadovnic, who also died in the catastrophic collapse just six months before the tragedy.

Nicole Langesfeld’s family now hopes her legacy will live on thanks in part to the street now named in her honor. “This street is not going anywhere,” Martin Langesfeld said. “When I’m gone, when you’re gone, it’s going to stay here forever. And it’s beautiful that nearly one year later, we’ve been able to do so many things to memorialize my sister, who was taken in a horrific way.”