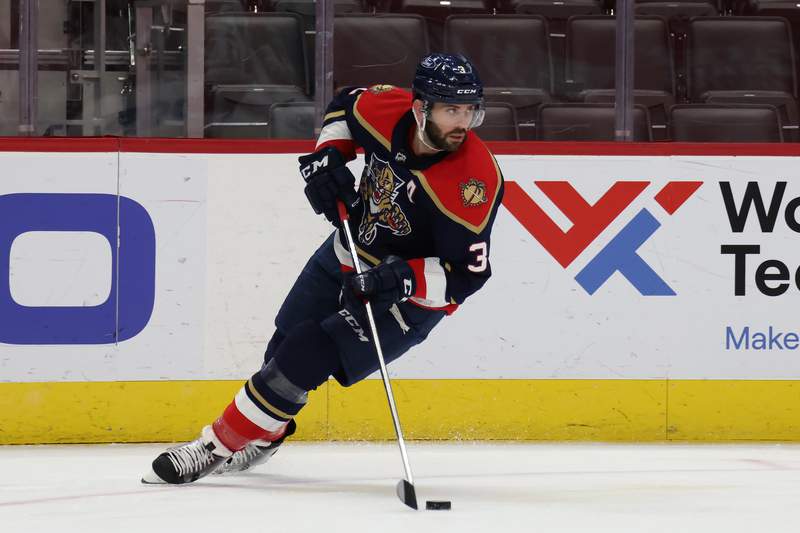 On Saturday, Yandle is expected to play in his 921st consecutive National Hockey League game.

Yes, that number is absolutely as outrageous as it sounds.

It’s over a decade of never missing a game for injury, illness, performance…anything.

Considering how far Yandle has come with his run of games, it certainly seems feasible that he could continue down that road of endurance, and eventually (43 games into next season, to be exact), become the NHL’s new Ironman.

When asked about the streak on Thursday, Yandle expressed genuine gratitude over being able to do what he loves for so long.

“It’s just something I’ve taken pride in, being able to come to work every day,” Yandle said. “I’ve said it a million times, that I’m just so fortunate to be able to play one game in the NHL.”

Indeed, just one game in the best league in the world is an amazing feat in and of itself.

Stringing 965 of them together and becoming a living legend…that just seems ridiculous.

And yet here we are, talking about it, because of Keith Yandle.

But you know what they say about 965-game Ironman streaks; It’s the last 43 games that are the hardest.

Throughout his career, Yandle has been one of the absolute best offensive defensemen in the NHL.

When it came to quarterbacking an efficiently run power play or hitting streaking wingers with sharp and accurate stretch passes from below his own goal line, Yandle was your guy.

This season, however, has felt a bit different.

It started during training camp, when whispers became louder that Yandle’s streak might come to an end on Opening Night.

During the final days of camp, he was not skating with what appeared to be the game one group and was not in his spot running the number one power play.

Low and behold, in the eleventh hour, Panthers head coach Joel Quenneville popped Yandle back on the top power play and into the lineup, and the streak lived on.

The story goes that several players voiced their support for Yandle and his streak to Quenneville, when it was thought he could be a healthy scratch.

Coach Q has had a reputation throughout his career behind the bench as a players’ coach who understands the importance of something like this, not only for the player, but his teammates as well.

This whole situation was based on Yandle potentially not playing on Opening Night, which was always just an assumption based on the lineups used by Florida late in camp. It was never a for-sure thing that he would be held out, but it still made for an interesting storyline heading into the season.

Even Quenneville acknowledged it when asked about Yandle’s streak on Friday.

“He’s done a lot of amazing things in his career. He’s ready to go game in game out,” Quenneville said. “He had an interesting start to the season and handled it well.”

When the Panthers’ 20-21 campaign began, Yandle appeared to be his usual self, running a potent power play and providing consistent offense while struggling at times defensively.

Through his first 17 games, Yandle racked up an impressive yet expected 13 points, nine of which came with Florida enjoying a man advantage.

“He played some great hockey right off the start of the season,” Quenneville said. “Our power play was very strong, and his contribution was in place.”

It was the same Yandle giveth, Yandle taketh away style of play that we have grown to expect.

Then, as the month of March rolled along, things started to change for the 34-year-old.

Perhaps it was some combination of the amazing Ironman streak finally catching up to him and having to play so many games in such a short amount of time this season, but over the past eight weeks, there has been a clear decline in the quality of play from Yandle.

We aren’t seeing the same sure-handed magician at the offensive blue line, keeping pucks in the zone and then moving them fluidly between his teammates.

Instead, there have been multiple instances where Yandle fumbling the puck at the blue line or making a poor pass has led directly to a shorthanded breakaway for the opposition.

What about the amazing 150-foot passes from behind his goalie to hit a streaking Sasha Barkov or Frank Vatrano, creating an instant scoring chance out of nowhere?

The parts of his game that have made Yandle such a reliable and talented offensive defenseman have been difficult to spot this season.

As a result, there have been several games in which Yandle’s ice time has been cut, with Quenneville even confirming as much after a game in early April, telling the media that the lack of minutes was not injury related.

It’s quite the conundrum.

Is the drop in quality of offensive minutes and increase in issues on the defensive side something that can be attributed to this crazy, pandemic-shortened season, or is father time finally catching up to Yandle?

Whatever it might be, Quenneville seems keen on churning his veteran rearguard out there, game after game, in the same offensive-oriented role.

“We’ve had some games where we dress seven (defensemen) and we’ve had some different games where (changes were made) on the back end, but he finds a way to keep playing and doing his thing,” Quenneville said.

Florida has two games left in the regular season. Two games closer to Jarvis and 964.

Once the postseason arrives, however, games no longer count toward the streak.

That could make for an interesting situation, should Quenneville suddenly decide he feels more comfortable with a defensive defenseman when the postseason arrives, rather than the high-risk, not-so-high-lately-reward Yandle.

It also begs the question of what’s going to happen next season in regard to the streak.

Don’t be surprised to see Quenneville continue to keep Yandle in the lineup as long as his play can warrant, which based on the past several weeks, doesn’t seem to be as high of a bar as it used to.

It could be that the toll of playing 56 games in 114 days has caught up to the NHL’s Tony Stark, and after taking the offseason to recharge, he arrives at training camp looking like the Yandle of old.

One thing that can be counted on is that Yandle continues to show up every day with an excellent attitude, ready to work hard and lift up his teammates however he can.

“Everything I’ve gotten in life is pretty much because of the NHL, and it’s definitely special to me,” Yandle said. “It’s one of those things that, I like coming to work, I like practicing, I love games and love being around the boys.”