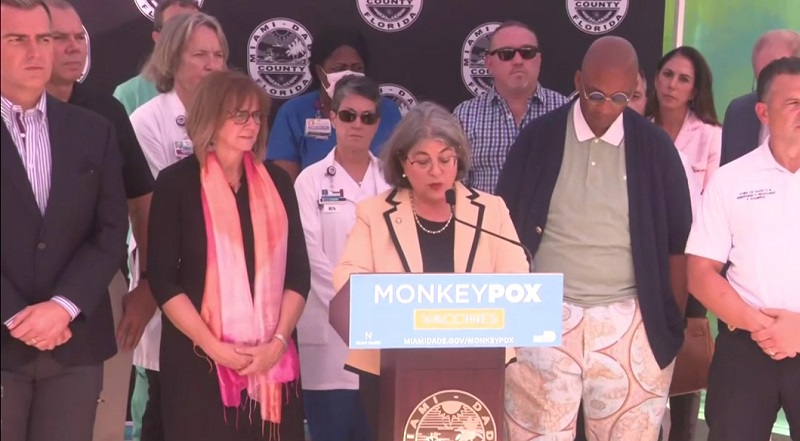 She was joined by local doctors as well as other county and municipal officials. “Listen up, be careful, arm yourself with knowledge and, if necessary, give us your arms for a vaccine,” Miami Beach Mayor Dan Gelber said.

Miami-Dade has received a limited supply of monkeypox vaccines, according to a release from the mayor’s office.
High-risk residents can make a vaccine appointment at the county’s website or by calling 1-833-875-0900, starting Wednesday at 8 a.m.

The appointments will be available beginning at two sites, one at 224 23rd St. in Miami Beach and one at Tropical Park in southwest Miami-Dade.

According to the county, it is working to open additional sites as more vaccines become available.

The high-risk groups include:

According to county officials, they intend to offer the standard two doses of the vaccine, spaced 28 days apart, despite a Florida Department of Health declaration Tuesday that only first doses would be administered until more vaccines become available.

The effort to ramp up vaccinations is coming just ahead of the school year. “I do expect to see children with infections,” Dr. Marcelo Laufer, a pediatric infectious disease specialist at Nicklaus Children’s Hospital, said.

He’s encouraging parents of children who have a new rash or skin lesion to consult with their primary care providers. However, he thinks monkeypox will be limited in schools, because it requires skin-to-skin contact.

According to Laufer, children are at risk for more severe disease.