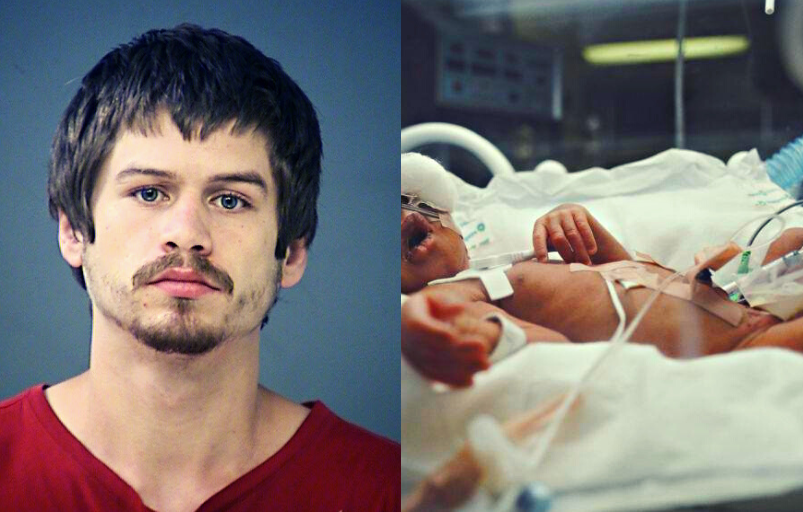 Taking care of children has never been easy especially when they are little babies. Being a parent means not just love for the children, but also a lot of time, dedication and effort while taking care of them.

But some parents, if we can call them parents at all, are simply not ready for the challenge of being a parent and they end up beating and abusing their children resulting with injuries and long-lasting consequences.

Such was the case with this Indiana father who couldn’t stand the baby and the pressure that comes with looking over his toddler. Instead of being calm and supportive, he became angry and furious when he realized that he can’t stop the baby crying and he started beating it.

According to the police report, the incident happened few weeks ago while the father, identified as Brandon Herring, was taking care of the baby son while his wife, the mother of the little Jaxson, was at work.

Despite the father’s efforts to calm him down, the baby was constantly crying for hours and at one point the father started beating and abusing the baby, the investigation shows. When he realized that the baby was not breathing, he called 911 asking for help.

The baby was immediately taken to hospital for treatment in critical condition. Since there was no brain activity, doctors decided to take him off life support and was pronounced dead two days later. According to the doctors, the baby had severe brain bleeding consistent with being shaken.

Court records claim Brandon Herring initially denied harming the child, then admitted he dropped the boy before confessing to violently shaking the baby. The incident happened after the father got frustrated and angry because the baby simply didn’t stop crying.

“It’s really hard because I have to tell myself it’s not my fault. I was at work. I was trying to provide for him,” said S. Thompson, the mother of the baby.

“It’s unbearable. I would not want any parent to go through what I’ve been through, to see my baby the way he was,” she added.

The father was arrested and initially charged with battery resulting in serious bodily injury, but since the boy died, he got his charges upgraded and he now faces murder charges. The police consider the case as criminal homicide.

The mother of the killed baby boy said that she expects nothing but the highest possible sentence for the alleged killer.

Man shot and killed his mother, father and sister then killed himself after family argument in their family house