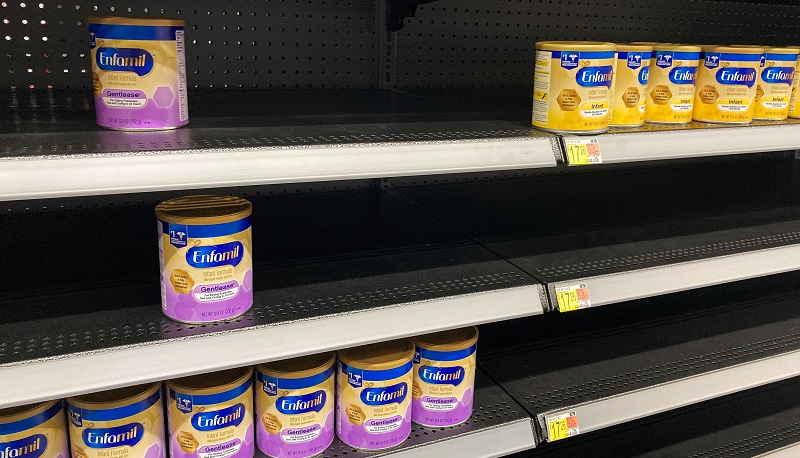 Coral Springs, Florida – Stockpiling of infant formula during Covid-19 and a baby boom in 2022 made it harder for suppliers to keep up with demand.

According to former FDA commissioner, Peter Pitts there is light, or baby formula at the end of the tunnel: “The closure at the Abbot Factory, and baby formula shortage, should be over in 6 to 10 weeks. The FDA has been working on it since February,” said Pitts in a May 14 media interview that includes nutrition information for parents.

While the baby formula shortage is at its worst in Tennessee, Texas, and both Dakotas, in Florida sparsity is undeniable, too. A check late last week and over the weekend of formula aisles at Coral Springs stores of CVS Health, Target, buybuyBaby, Publix, and other retailers turned up shortages and empty shelves.

According to an employee, at a CVS store on Wiles Road, larger cans were stocked behind the register to prevent theft.

In recent days, a private local mom’s group on Facebook posted photos of two stores in Coral Springs with plenty of supplies of the baby formula: Costco at 4621 Coral Ridge Drive, and Bravo Supermarket at 10301 Royal Palm Boulevard.

According to Coral Springs parent and expectant mother, Keren Prize Bolter, she’s seeing useful information on local social media on where to find the baby formula, and she encourages moms to stay active in online groups.

“I’ve never needed to use baby formula, and don’t think I will this time, either, but I belong to a few local moms groups where moms are making requests and offering tips and spare formula stashes,” she said.