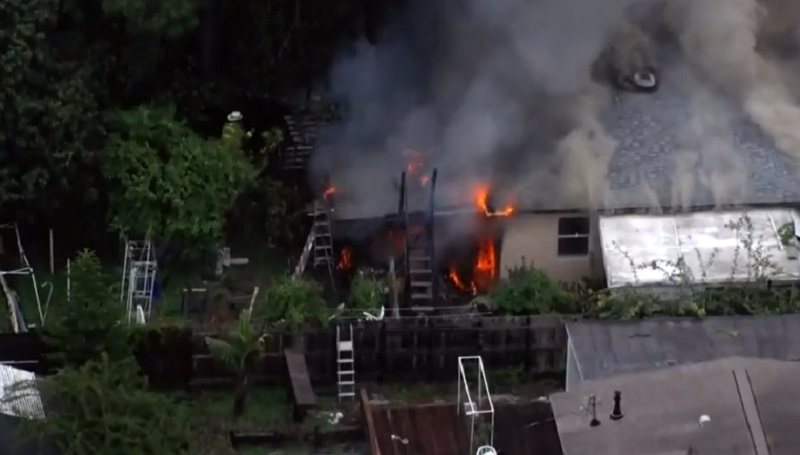 According to authorities, on Tuesday at around 4 p.m., they responded to several calls regarding the Flamingo Park neighborhood area around Southwest 23rd Avenue near South 13th Street.

Upon arrival, they found the back of a house engulfed in flames. “Just after 4 o’clock this afternoon, we received numerous 911 calls for a fire in a residential house,” said Fort Lauderdale Fire Rescue Battalion Chief Stephen Gollan.

Some neighbors were shocked by all the commotion. “I just walked out and, you know, I saw trucks everywhere,” said Bonnie Aloise, a neighbor.

“The homeowner was home at the time of the fire, stated that she had heard some popping and out back just after the storms had passed through,” said Gollan. “When she went out back to see what was taking place, she saw the back patio was on fire. At this time, the fire is still under investigation, and thankfully there were no injuries.”

Those who live in the area told that their neighborhood was pounded by afternoon storms. “Loud thunder,” said Aloise.

The homeowner and her cat were able to get out of the house safely, but the entire back patio is now a charred mess. “That’s awful,” said Aloise. The rest of the home was also left filled with smoke and water damage.

There was some severe weather that came through the area right before they got the calls, according to fire rescue. They are trying to see if maybe that has something to do with the fire.