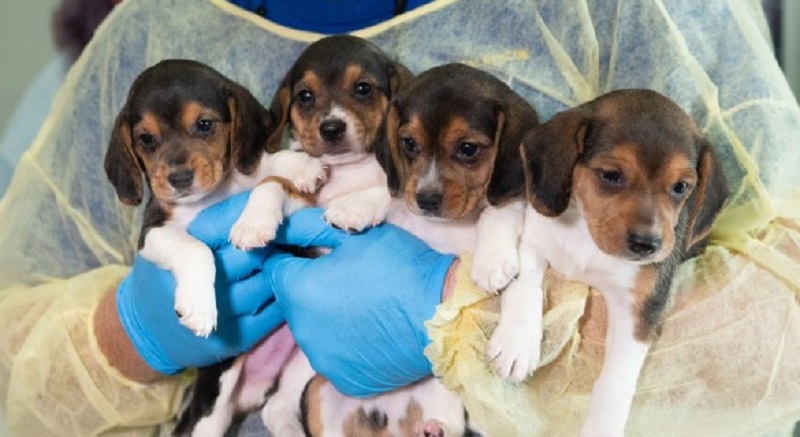 Fort Lauderdale, Florida – Over 40 beagles are up for adoption at the Humane Society of Broward County in Dania Beach, which includes Missy, one of the first pups to leave for her forever home.

“I’m very excited to say our very first beagle is going home,” said Cherie Wachter, vice president of marketing at the Humane Society of Broward County. “Over here is her new mom, and let’s see her little new baby that’s going home. This is baby Missy, look at her! I know it was so hard to choose because there were so many adorable beagles.”

Four thousand pups were saved from a mass breeding facility in Virginia called Envigo. Envigo faces dozens of federal violations for neglect and abuse, including more than 300 puppy deaths. “They were then shipped to other facilities where who knows what types of experiments were going to be done on them,” Wachter said.

Over 40 of those beagles were brought to South Florida and given much-needed care and health checks last week.

The shelter will meet with South Floridians who want to visit and adopt the rescues starting Monday.“Today is the first day that all the folks that scheduled appointments to meet the beagles, it’s happening,” Wachter said.

They’ve gotten over 1,000 applications for these beloved beagles, they said. So much so, that they had to shut down the website. Now, the beagles are one step closer to going to a safe and loving home. “We’re thrilled with the outpouring of support the community has shown for these dogs,” Wachter said. “I know they’re all going to get adopted very quickly.”

As all current appointments are all filled up, this week, all shelter visits will be by appointment only.

According to the shelter, people can donate to help them or adopt another animal in need because there are so many animals that are there and need a loving home.