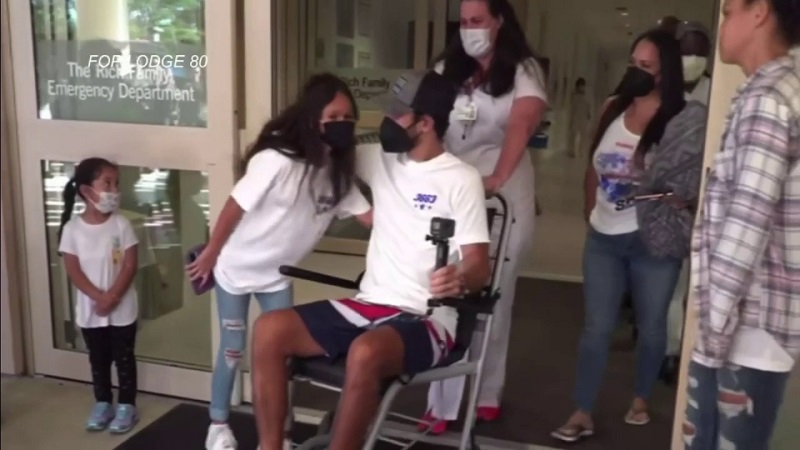 Sunrise, Florida – After a 70-day stay in the hospital battling COVID-19, Sgt. Darwin Arroyo was home.

According to the 14-year veteran of the Sunrise Police Department, he contracted the virus at work in early August, and his symptoms worsened.“I was throwing up. It was diarrhea, fever, shortness of breath,” Arroyo said. “Four days later I went to the hospital. They kept me.”

Computed tomography scans and X-rays showed damage to his lungs and doctors thought he would need a lung transplant, Arroyo said.

According to Arroyo, he was intubated twice and put on an extracorporeal life support machine, a device that helps the heart and the respiratory system. His second round on life support proved to be a lifeline, Arroyo said. The husband and father of two started improving and walking.

On Oct. 18, doctors released Arroyo from the Cleveland Clinic, and he was able to hug his daughters for the first time in a long time. A line of officers and community members chanted his name as he walked out the front door. “It was so surreal. The support and love that everyone showed me were amazing,” Arroyo said.

Arroyo had not yet gotten the vaccine when he was diagnosed with COVID-19, but he plans to get his shots when his doctors medically clear him in about three months. “When I’m able to, I’m going to get the vaccine,” he said. “I know God uses all our life stories for a reason, so if anybody had to go through this, I’m glad it was me because I don’t wish that on anybody else.”