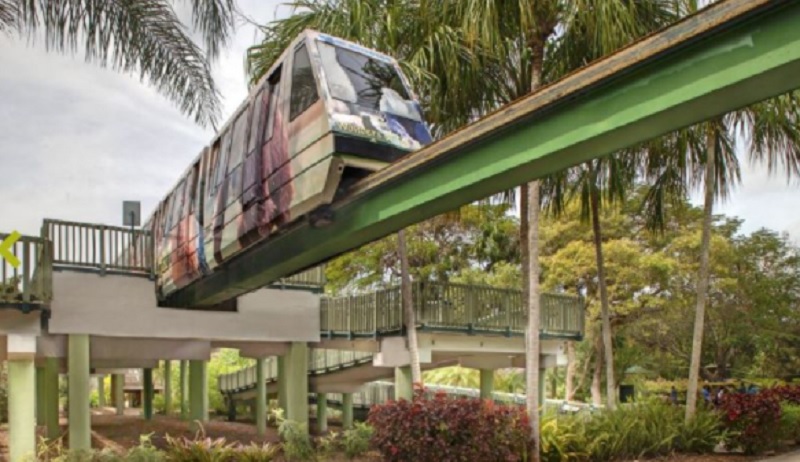 The “Zoofari” opened in 1982 and originally consisted of three trains that provided elevated transportation around the zoo on a 2.2-mile-long track.

In 1987, two additional trains were added, which had been used at the World’s Fair in New Orleans.

Hurricane Andrew severely damaged the monorail in 1992 and it took several months to finish repairs, according to zoo officials.

According to Henry Gomez of Transportation Zoo Miami, the problem with keeping the monorail running was its age and that the original manufacturer went out of business and replacements became unavailable.

“Our maintenance department really did a wonderful job to hold it together with whatever they could we had a lot of parts manufactured. It’s not cost-effective at this point. The replacement is exuberant.”

Zoo visitors especially enjoyed the monorail during the summer as it provided relief from the heat in its air-conditioned cars. “The air conditioning in the summer months was huge.,” said Ron Magill of Zoo Miami. “There was also a visual attraction to it. You are walking through a park and you have this beautiful modern-looking monorail going above you. It was like a Disney Junior. It gave a lot of credibility to the park,” Magill said, adding that it gave it the park the look of a “serious attraction.”

According to Zoo officials, it will be costly to remove the monorail and track, but it will still be considerably less expensive than trying to keep the outdated system operational.

At the end of the year, work to deconstruct the monorail is expected to begin. “Though the monorail is no longer operational, Zoo Miami has other sources of transportation available within the park including regular tram tours as well as safari cycle rentals. They will be trams will be added in the near future. In addition, special VIP golf cart tours are available by reservation online and through the group sales department, according to Zoo Miami.