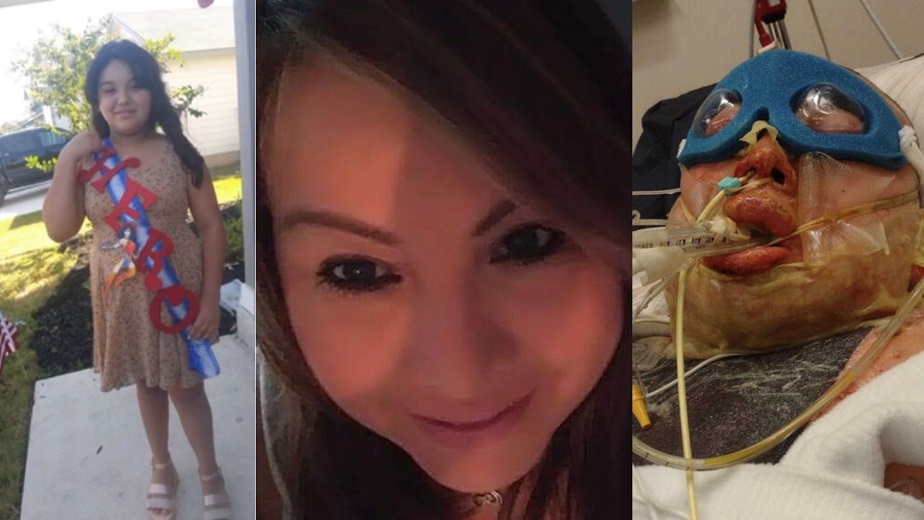 When it comes to domestic violence cases, many of them remain unreported for different reasons and they are usually resulting with injured victims and sometimes deaths. In today’s case, a minor child was the hero when she managed to save her grandmother’s life after she was attacked by her ex-boyfriend.

The 52-year-old Deborah R. sustained harrowing injuries on her face and body after her ex-boyfriend, the 43-year-old Roberto C., poured gas all over her and lit her on fire by throwing a lighter inside her house in Texas.

Reportedly, Deborah was a certified nursing assistant and had just gotten off work when Roberto started arguing with her, and at some point the argument escalated and he lit Deborah on fire.

Deborah’s granddaughter, the 10-year-old Neveah G., was playing with her 2-year-old sister in her room when the incident occurred. Out of a sudden, she heard her grandmother screaming in the living room and she panicked.

She came out the room and witnessed the horror scene, and instead of remaining petrified, the love for her grandma surfaced and she rushed to save her life by pushing Roberto, enabling Deborah to run away.

Deborah ran outside to put out the fire as she was burning alive, but discovered that the water had been turned off. Luckily, there was a bucket of mop water nearby which she poured on her body and extinguished the fire.

After enabling her grandmother to escape from the hands of the monster, Neveah returned to the room to save her sister from the smoke, took her out in the yard and ran next door asking for help.

Authorities believe this was a planned attack and not just an escalation of an argument, since Roberto had turned off the water deliberately before he got into the house.

Deborah was taken into hospital, and doctors said she would need several surgeries because of her’ second degree burns on 35% of her body.

Roberto was arrested for aggravated assault with a deadly weapon causing serious bodily injury and arson. His bond has been set at $500,000.

Neveah was hailed as hero after the whole incident and received a stack of $100 bills as a reward for her heroism from the Cash for Kindness Program of Fox San Antonio, and once again the strong bond with her grandmother surfaced, instantly saying she would use the money to help her grandma.

Related Topics:
Up Next

Tampa man fired into car & hit child after an argument

“I’ve spotted a little boy near the highway”, woman reports lost child to 911 after leaving him on the street