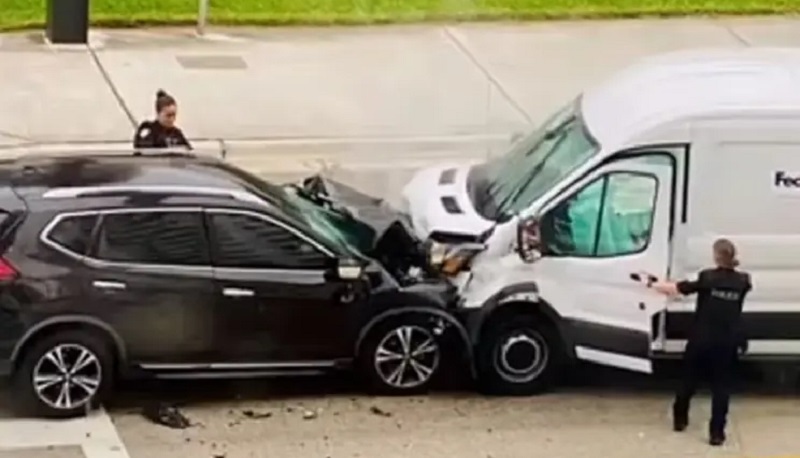 Fort Lauderdale, Florida – According to a traffic report obtained Wednesday, a head-on collision in Fort Lauderdale resulted from a woman performing oral sex on the driver.

A 20-year-old woman inside an SUV was performing oral sex on the 32-year-old driver when the driver crashed head-on with a FedEx truck, according to Fort Lauderdale Fire Rescue officials.

The traffic report states that the driver of the SUV was heading south on A1A as the FedEx driver was heading north.

Two Fort Lauderdale police officers witnessed the SUV crossing from the southbound lanes over the double yellow line into the path of the delivery truck, causing the vehicles to collide head-on, officials said.

The officers broke the windows of the SUV to help the driver and passenger, who were both unconscious but breathing, the report stated.

According to first responders, the couple was naked and the man suffered injuries to his private area due to what was going on at the time of the crash.

Both the driver and victim were transported to Broward Health Medical Center with non-life-threatening injuries.

The FedEx driver and his passenger sustained minor injuries in the crash, according to Fort Lauderdale Fire Rescue.

Both vehicles were towed due to the damage sustained in the crash, and the driver of the SUV was found to be at fault, according to the traffic report.