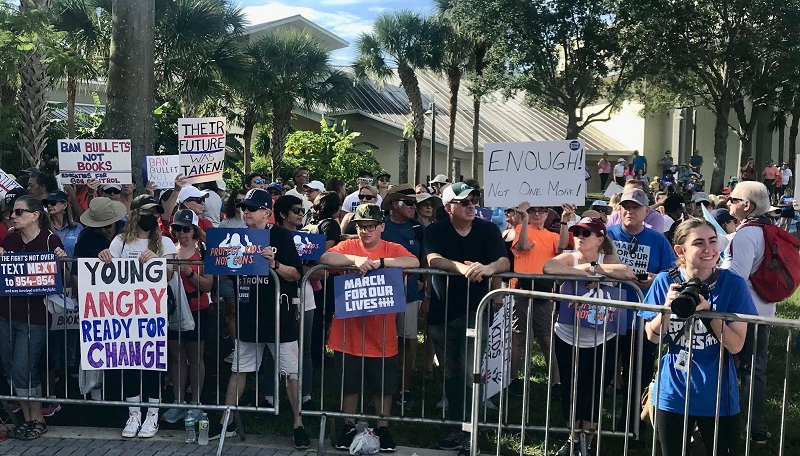 Parkland, Florida – One of 400 March For Our Lives rallies around the country was held Saturday morning at Pine Trails Amphitheater in Parkland.

On Saturday, thousands of gun control advocates are expected to rally across the country in nationwide March for Our Lives rallies.

In Parkland, rally goers were holding signs that read “Stop Gun Violence,” “#Enough” and “Just Go Out and Vote.”

With speakers who are survivors, family members, and activists personally impacted by gun violence, the rally began at 9:30 a.m.

The group planned a march throughout the park at 10:30 a.m.

A 16-year-old, Zoe Weissman, president of the March for Our Lives Parkland, was in middle school at the time of the Marjory Stoneman massacre. She has become an advocate for gun control because of what she experienced the day of the shootings. “It means a lot to see how many people care about our mission. At the same time, it also gives me hope that we are also going to be able to make a change. This time is different. We’ve been fighting for the past four years and I think it’s going to culminate into action.”

Other rallies planned in South Florida for Saturday include one organized by students from Cypress Bay High School at the Weston Library Park from 9 a.m. to 11 a.m.

A rally will be held in front of Coral Gables City Hall at 4 p.m.