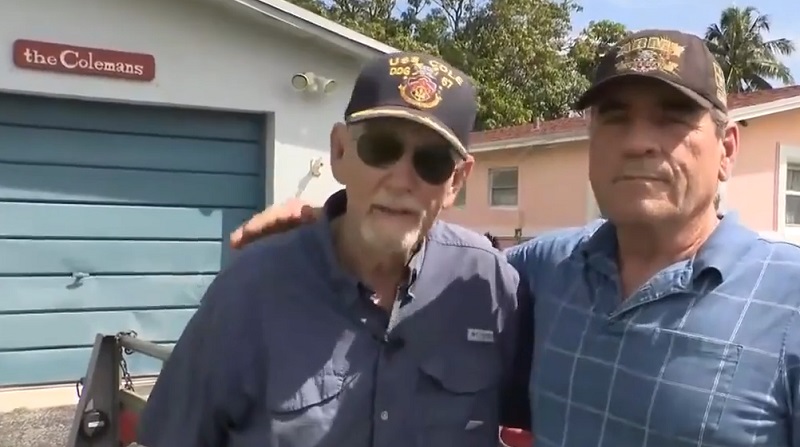 Lauderdale, Lakes, Florida – A veteran offered a helping hand to a businessman who suffered a major setback after a crime.

The donation will allow Army veteran and welder George Giraldo to get back to work. “This is an ARC welder and a MIG welder, all the oxygen has settled in, equipment, torches, and different items he needs to get back to work,” said Bill Coleman, who donated the tools.

Last Friday, Giraldo’s work truck was broken into, while he had it parked behind a Burger King off Oakland Park Boulevard. “They came over here, and they freaking cut the lock, they freaking ripped it open,” said Giraldo. “Everything is gone that I need to weld with.”

Surveillance cameras captured the subjects as they climbed over the fence with the equipment, costing nearly $10,000, and loaded it into the back of a two-toned color pick-up truck. “They did me wrong, they did me wrong,” he said.

“Kids nowadays are just raised with no moral compass,” said Coleman. “They are gonna grow up to be lawless adults, and it’s just ridiculous the things that are going on.”

Coleman, who is also a veteran and retired merchant Marine, felt compelled to do something. “It was on that Channel 7News, I actually saw it, the first report at night,” said Coleman. “The Holy Spirit hit me upside the head and said, ‘Look you’re gonna donate this gear.’”

“Us veterans stick together. He saw me, a veteran, and that’s what caught his eye, and he said, ‘gotta help my veteran buddy,’” said Giraldo. “We’re brothers forever, man. God bless you.”

Giraldo hopes the police do some detective work and catch the men who are responsible for stealing his equipment. According to him, the getaway car is still out there. “It’s a Silverado, even got the ground effects on it. It’s red in the front and black on the back,” said Giraldo. “The whole cargo bed and the whole cargo area is black. It sticks out like a sore thumb.”

If you have any information on this theft, call Broward County Crime Stoppers at 954-493-TIPS. Remember, you can always remain anonymous, and you may be eligible for a reward of up to $5,000.